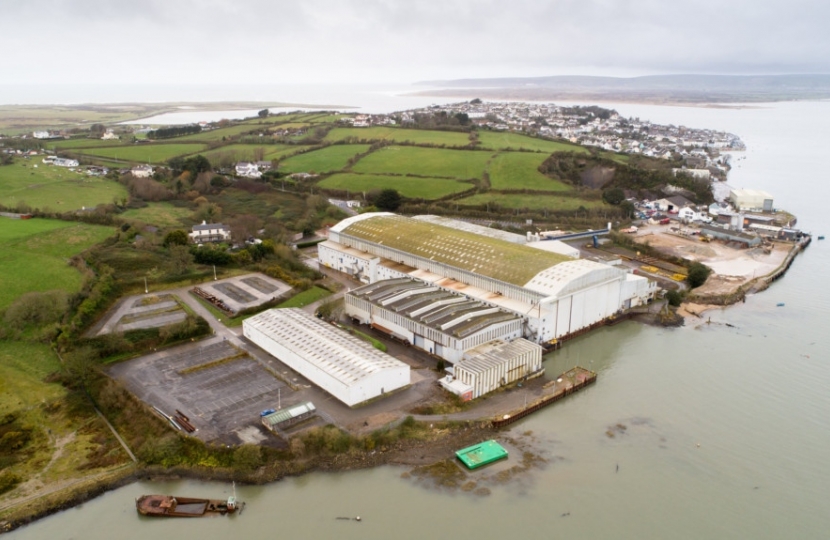 Geoffrey has welcomed today’s announcement that Appledore Shipyard will reopen, after being bought by dynamic London based firm, and owners of Belfast Shipyard Harland & Wolff, Infrastrata.

The MP has worked tirelessly over the last eighteen months to support efforts to bring shipbuilding jobs back to the Torridge and see the historic shipyard reopen.  Since its closure was announced by Babcock in March 2019, Mr Cox has been engaged in discussions and meetings with the Government’s Taskforce, potential purchasers and the major potential customers of the Yard to try to identify a credible way to reopen it.

The MP also secured the personal support of the Prime Minister, holding several summit meetings at No 10 Downing Street with the PM and his staff, as part of the Government’s wider campaign to reinvigorate and invest in British shipbuilding.

As the owners of the Harland and Wolff shipyard in Belfast, Infrastrata are ideally placed to bring shipbuilding back to the Torridge, focused as they are on the development, commercialisation and operation of advanced high value strategic infrastructure facilities across the globe. The firm acquired Harland and Wolff in December 2019 but see Appledore as a complementary acquisition, ideally suited to the construction of small and medium sized vessels for which there is a growing market.

“Over the past eighteen months I have been engaged in constant and vigorous discussions with my cabinet colleagues, key decision makers in Whitehall, overseas customers and the industry, in support of reopening Appledore Shipyard.

“It has always been the case that the Yard needed a credible and established new owner with a viable business plan for long-term operations. I have been committed to doing all I could to see this historic shipyard reopen and I was ready to support any credible proposals to bring shipbuilding back to Appledore.

“I have had continuing dialogue and discussions with Infrastrata since they expressed interest in the Yard, but it has been necessary to maintain a tight commercial confidentiality. Their purchase of the Yard is excellent news for the local community, ensuring, as it does, the future of the Yard and its workforce. I will continue to support the firm and our superb Shipyard to ensure the Government’s strong backing as they develop their business and realise the Yard’s potential.”