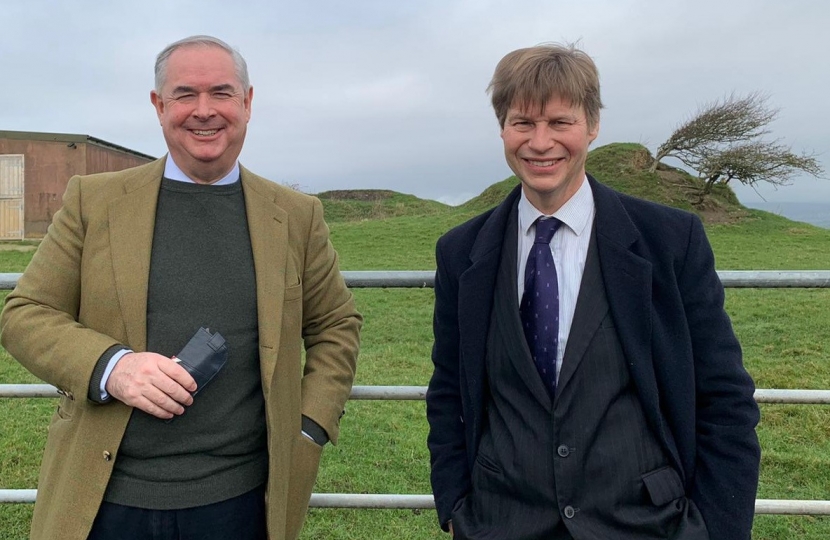 On Friday, 28 January 2022, Geoffrey visited Fort Hill — the site of Appledore’s newest scheduled historic monument, and the location of a once famous Civil War Fort and battle.

Local residents sought Geoffrey’s support to nominate the site last year, and he was pleased to back the campaign, which has now resulted in it becoming a Scheduled Monument. The application was supported by archaeologists and Civil War historians from around the UK.

Geoffrey also met well-known children’s author and Appledore resident, Nick Arnold, at the site, who carried out detailed research into its history to prove the need for its protection, as well as other residents who participated in the campaign.

The Fort, built in 1643, commanded the sea approaches to both Bideford and Barnstaple and was a crucial strategic emplacement in the control of Northern Devon for which the Parliamentary and Royalist forces fought bitterly between 1644 and 1646. In July 1644, Parliamentary forces of over 300 soldiers laid siege to the Fort, which was garrisoned by 40 Royalist musketeers from Devon and Cornwall who put up a fierce resistance. The Parliamentary forces were beaten back with the loss of 120 men and the Fort was relieved by Royalist soldiers sent by the King himself. The siege was described in a Royalist newssheet and a year later, the King’s son, Prince Charles (later Charles II) visited the Fort to thank the defenders.

“Only sites which it is in the public interest to preserve because they have special historic or archaeological significance are given this recognition by Historic England and, last year, throughout the country, just 21 sites were accepted as Scheduled Historic Monuments. It is important we protect our great historical heritage in Torridge, and I am delighted our campaign succeeded in doing so for this site, where so many brave men fought and died in a controversy that helped fashion the nation we know today.”