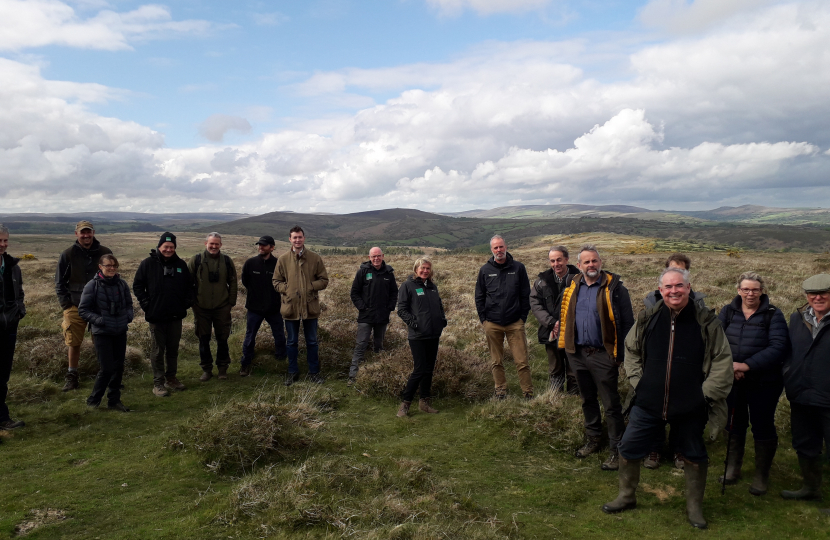 On Thursday, 12 May 2022, Geoffrey held a packed forum on the future of Dartmoor at Two Bridges Hotel.

Geoffrey — who convened and organised the forum with the NFU — invited the Chief Executive of Natural England, Marian Spain, to be the principal guest and speaker in a panel which included Kevin Bishop, CEO of the Dartmoor National Park Authority as well as Philip French, Chairman of the Dartmoor Commoners Council, and Tom Stratton, Agent for the Duchy of Cornwall. The day commenced with a visit by Geoffrey and the Chief Executive to the Moor to view its condition and the problems that the current rules and restrictions are causing.

An evening meeting followed, with over 150 people in attendance, including farmers and others with an interest in the Moor. There was a lively discussion about the future of farming on Dartmoor and the need for a pragmatic and collaborative approach to traditional farming practices if farming is to survive there.

“After my meetings with local farmers and Natural England last year, I wanted to promote a refreshed dialogue and better understanding between them, and I was delighted that Marian Spain agreed to join us. It is vital for the wellbeing of our communities and of the Moor that farming is preserved, and it is clearer now than ever after our discussions, that Natural England can achieve its statutory objectives only if a commercial and viable basis for farming on Dartmoor can be found.

“I was extremely grateful to Marian Spain for coming and her willingness to listen and to engage was very much appreciated by all who attended.”

The conference is to be followed up in a working group consisting of Natural England representatives and local farmers and by a further meeting between the Chief Executive and the MP before making representations to farming ministers.